The almond blossom on Mallorca is a wonder of nature and a welcome reason to visit Mallorca in winter. As soon as the temperatures rise on the island, white (sweet almond) or pink flowers (bitter almond) gradually open from millions of almond trees. We tell you where they bloom most beautifully and what you can do on the island at the time of almond blossom.

The almond blossom on Mallorca and the beautiful buzz

The island is in a different mood at this time of year, calmer, more serene, greener. It is mild and there is often enough sun for hiking, cycling and other activities. The almond blossom on Mallorca usually lasts from the end of January to the beginning/middle of March. But when the natural spectacle actually begins and how long it lasts depends on the weather and temperatures of the respective winter. Depending on the region of Mallorca, the almond trees also blossom at different times. And beware: there have been years when the almond blossom was premature at the beginning/middle of January and everything was over in February.

Where is the almond blossom most beautiful on Mallorca:

The almond blossom can actually be observed island-wide - the approximately four million trees are well distributed. The total area of almond orchards is estimated at 19,100 hectares. Strictly speaking, you cannot avoid experiencing the almond blossom when you are on the island. There are also hotspots that display a particularly beautiful or large sea of colour. In the west, these include the valleys around Valdemossa, Sóller and Esporles. In the east of the island, the trees flourish near Santanyi, Portocolom, Porto Cristo, Felanitx and Cala Figuera. The almond blossom starts early in the centre of the island - around Alaro, between Llucmajor and Cala Pi and between Sineu and Es Trenc. The Bunyola valley is another almond spot. Those on holiday in Palma go to Port d'Andratx, Andratx and S'Arracó. And if you want to see it all, go on an almond blossom tour.

When is the best time for the almond blossom on Mallorca: Here you have to be a little flexible and well informed before departure. The almond blossom can start early in January, but depending on the weather it can also last until February. The delicate almond blossoms only burst into bloom at a constant double-digit temperature. The blossoms in the somewhat milder east or in the centre of the island are traditionally somewhat quicker than the blossoms in the western mountain regions, where it is usually even cooler. For orientation: the period for almond blossom on Mallorca is from the middle/end of January to the beginning of March. You are relatively certain to encounter the almond blossom if you visit Mallorca at the beginning of February.

4. Hikes during the almond blossom on Mallorca:

Almond products made in Mallorca: 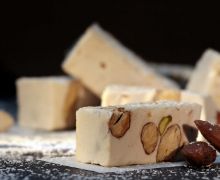 Besides the almond blossom, Mallorca benefits above all from the versatile almond fruit, which is mostly processed in one of the traditional family businesses. The range of almond products is impressive: almond liqueur, almond perfume, almond oil, almond cheese, almond soap, almond nougat, almond ice cream. Almond delicacies are among the most popular souvenirs from the island. Mallorcans themselves especially love their almond cake (gató de almendra) and the almond-honey Christmas cake turrón.

Almond blossom - the scent of the island

If you can't get enough of the almond blossoms on Mallorca and don't want to miss the scent, you can take both home with you in a bottle: "Flor d'Ametler" is the magic word and describes the unique almond perfume from the island. It has been produced since 1930 and preserves spring in the bottle. More than 70 years ago, the Mallorcan Bernardo Vallori had the idea of immortalising the scent of the almond blossom he loved in a perfume. He remembered how his mother and grandmother used to mix rosemary, lavender, sage and mint into their perfumes and the miraculous effect they had. Vallori refined the method and experimented with the almond blossom until the result really deserved the name "Flor d'Ametler".

To this day, the perfume is still produced by hand in the family business in Pont d'Inca (Marratxi) according to the secret recipe. When the miracle of the almond blossom repeats itself in January and February, the flower gatherers swarm out. Each almond blossom is carefully selected and hand-picked, then immediately placed in a secret essence so as not to lose any of its sweet, fresh fragrance. In addition to the perfume, a five-petalled blossom is placed in each bottle as decoration and greeting. The perfume workshop can also be visited. Contact: 0034 971 601 510 / info@flordametler.com.

The almonds are harvested in midsummer and early autumn and often this is still pure manual labour. The nets are spread out in the plantations and the farmers shake the trees with long poles until the precious fruit falls to the ground. In the meantime, however, more and more mechanised tree shakers are taking over this hard work. As with the almond blossom, there are guided tours and tours on the plantations especially for people interested in the almond harvest.

Around 1000 tonnes of almonds were harvested on Mallorca in 2019 - this was a drop of almost 20 percent compared to the year before and it also has consequences for the island's economy. Until a few years ago, Mallorca was considered the most important almond producer in Spain. The island has already had to relinquish this rank. Because of competition from California and falling world market prices, fewer almonds were produced on the island. Climate change and pests have also contributed to the general decline in the almond harvest. The so-called fire bacterium has already attacked numerous trees on the island and caused them to die of thirst - it prevents the trees from absorbing water.

Experts and almond farmers do not want to wait for the almond to disappear from the island. So the trees are being monitored, new ones are being planted and, above all, varieties that develop resistance to the fire bacterium are being promoted.

How Mallorca became the Almond Island

For 300 years, the Moors ruled Mallorca. In addition to some prosperity and many ideas for the irrigation system, among other things, they also brought the almond tree to Mallorca. That was in the 10th century. However, almond cultivation on the island did not really blossom until 1890, the time of the phylloxera plague. The pest destroyed almost all the vines on the island and many winegrowers had no choice but to turn to other crops. The almond was now cultivated on a large scale and Mallorca soon became the largest contiguous almond-growing area.

At the same time, the almond became one of the most important trade goods - an export hit. The island also owes this success to the special aroma of the Majorca almond. With a slightly sweet, aromatic note and a higher fat content, the local fruit differs from the competition from California, for example. If you want to be sure you've got a Mallorcan almond, look for the "Almendra Mallorquina" quality seal when you buy one.

Events for the almond blossom on Mallorca

The Mallorcans love and celebrate their almond tree. Always on the first Sunday in February, the "Firó de la Flor d'Amtler" is celebrated in Son Severa (east) - the almond blossom festival. If you look around the stalls there, you will get an idea of how many products are (or can be) made from the almond itself, the wood of the tree or the blossom - let me tell you this much: it is a lot. A week after Son Severa, the town of Petra also pays homage to the almond blossom on Mallorca with a spring festival.

Mallorca Sightseeing & Culture Mallorcas weekly markets
Almond blossom Mallorca
Mallorca monastery
We are using own and third-party cookies on our website in order to improve our services and to improve your user experience by means of evaluating your navigation habits. If you keep on surfing on our website we shall consider that you accept this use of cookies. You may change the configuration or get further information here.
×