Discover Mallorca - the authentic centre of the island

The centre of Mallorca is traditional, varied and offers an incredibly beautiful landscape between windmills, vineyards and quaint villages. This is the place to be if you want a finca holiday or a nice wine tour.

Island Centre with monasteries and vineyards

In the centre of Mallorca, south of the Sierra de Tramuntana mountain range and north of the Sierra de Levant, there is a large, vastly flat and extremely fertile plain that has been the centre of agriculture for centuries. The Pla de Mallorca, also known as "Es Pla", which translates simply as "The Plain", offers not only the mildest climate on the island, but also the warmest summer days. Well protected amidst the mountains, most of the rain already falls on the coast before the clouds move on here, which makes winter especially pleasant. The falling rain comes into the valley via torrents and irrigates the many fields and groves.

From the centre of Mallorca rises the Puig de Randa. On this table mountain, also known as the "Holy Mountain", there are three wonderful monasteries, from bottom to top the "Nostra Senyora de Gracia", which lies on a small overhang and whose church can be visited. Also to be visited is the church of the hermitage "Son Honorato". On the top is the monastery of "Nostra Senyora de Cura" with a church, a historical fountain and the beer garden with perhaps the most beautiful view in Mallorca.

Enchanting views in fairytale-like blossom dreams are offered by the centre of Mallorca during the almond blossom season. No matter from which vantage point, these islands of delicate pink will dominate the field of vision everywhere shortly after the start of the year. In January and February, you can take walks through the valleys of the centre of the island and wander through the sea of fragrance and colour.

Besides the almond blossom, don't forget the apricots, especially around Porreres. In the apricot stronghold of the island, many restaurants have specialised in the fruit to conjure up new delicacies in all imaginative variations. This leads to various jams, fresh fruit tarts and pickled apricots, to sweet chocolate-covered fruits and many local dishes to which apricots have been added as a delicious garnish. Agromart, the island-wide shopping chain that sells many fresh and local foods, was founded here in Porreres. Likewise, this small town is the hub of many cycling excursions.

In general, the centre of the island is like a colourful circle of beautiful villages. Not far from Porreres, Montuiri is perched on a hill. Like a defiant castle, the village seems to shield itself from the plain. A special experience once you have climbed the steps leading up to the centre. Many of the villages in the centre of Mallorca are attractive destinations in July and August, when village festivals are celebrated, with a stage featuring live music and local shows taking centre stage in the cosy market squares. Many market stalls, small attractions and oodles of delicacies fill the frame of these festivals.

The most important places to visit in "Es Pla" have to be Sineu, with one of the most famous markets on the whole island, and the former centre of Mallorcan shoe fashion: Alaro. At the height of the industry, shoes were made in over 30 factories, and to this day one manufacturer remains that is definitely a household name to connoisseurs of good cowboy boots: Tony Mora. Today, this romantic town on the slopes of the Sierrade Tramuntana is dominated by the property trade and is inhabited by many international residents.

Don't miss the "good Thursday", Dijous Bo in Inca in November: this is one of the biggest autumn festivals island-wide and there you can find out about clothing, textiles, leather, the latest fashion, culinary delicacies and join in the island's typical nightlife with a full-bodied wine. While Inca offers a lot of handicraft, which is due to the traditional leather and wood processing, the hustle and bustle in Sineu offers you many of the Mallorcan delicacies such as ham and wines.

The alternative to package holidays in hotels is called Agrotourismo and refers to finca holidays in Mallorca, especially in the centre of the island. Many rural farms and country houses in this area were converted into accommodation with the discovery of the centre of the island, in order to be able to maintain the often huge estates with extensive gardens and orange or olive trees. The fincas are typically Mallorcan. So if you want to enjoy the island feeling and be as self-sufficient as possible, you can stay in one of the country houses.

Puig de Randa is a mountain about 550 metres high. Those who are not only interested in the panoramic view can visit three monastery complexes at once. On the narrow road to the summit, you pass two monasteries about halfway up. The first one, dating from the 15th century, is particularly interesting. At the summit is the 13th century Santuari Nostra Senyora de Cura with its monastery church, monastery garden and museum.

The oldest farmers' market on the island plays once a week - always on Wednesdays - in Sineu. The village is geographically the center of the island and also takes center stage in the Mallorca markets. Despite many tourists, the Sineu market is still mallorquin. Through the small streets people scurry uphill and downhill, it is traded and haggled for livestock. Around noon, the hustle and bustle dies down and most visitors take in the island life in one of the cafes.

The middle of the island - Mallorca's wine cellar

Wine growing is all around us in the centre of Mallorca. Whether as extensive fields interrupting the otherwise so dominant and especially in blossom picturesquely enchanting almond groves, or as an export hit. The famous wine route from Santa Maria, via Santa Eugenia, Sencelles, Binissalem with its entertaining wine festival, to Consell is the occasion for many wine tasting tours, wine fairs or the combination of wine & tapas.

The best-known wineries, known locally as "bodegas", are Macia Batle, Jose L Ferrer and Antonio Nadal, the latter named after the most successful tennis coach and mentor of Rafael Nadal, two world-famous Mallorcans. Very popular for wine tasting, the "cata de vinos" or "wine tasting", is a combination of tapas & wine: get to know the culinary heart of Spain while tasting typical regionally prepared tapas with a matching Mallorcan wine. The designation D.O. (Denominación de origen), you can recognise high-quality island wines. This is a designation of origin for Mallorcan wine-growing areas.

From bodega to bodega

Mallorca's bodegas are steeped in tradition and many are highly regarded around the world. Some of the most famous are definitely worth a visit:

1. Bodega Àngel: Founded in the 1960s by a Mallorcan, the winery consists of 17 hectares of land that produces varieties such as Prensal Blanc (Moll), Manto Negro, Chardonnay, Merlot and Cabernet Sauvignon in an ideal location. Viognier is also grown, the result of which is the absolutely recommendable "Angel Viognier". If you visit this bodega, it is actually obligatory not to taste it!

3. Bodega Jose L. Ferrer: On 135 hectares of cultivated land, many different types of wine are grown on this largest vineyard on Mallorca. As a pioneer of modern winegrowing on Mallorca, this company is already being run by the 4th generation. On site, visitors can taste the delicious wines for a few euros and also have the corresponding bottles sent directly to their home country, if they are still in stock. If you make a detour here, don't miss the cuvée "Veritas Añada" from 60% Manto Negro, 22% Tempranillo, 9% Cabernet Sauvignon, and 9% Callet, which has already won several international awards.

4. Bodega Miquel Oliver: built in 1865, the winery now produces innovative wines using modern and ancestral winemaking techniques. Be sure to visit this cellar, as it is the best preserved of its age in Mallorca! Miquel Oliver's wines also receive top marks in national and international wine competitions.

5. Bodega Sebastia Pastor: Built from a small vaulted cellar where the small bodega used to only offer table wine and still modestly celebrated the annual harvest, this winery has rapidly developed over the generations as an innovative business. With the introduction of temperature-controlled stainless steel barrels, it was possible to produce an incredibly good, consistent quality at the time. The grape varieties grown, on the other hand, remained conservative: Mallorcan Manto Negro has been growing in the fields around Santa Maria for 45 years, alongside Callet and Premsal-Blanc. Recently, Syrah was also allowed to make its debut. However, the single-varietal Manto Negro, which is only produced from the best vines, gets a recommendation.

Besides delicious wine tastings, hiking and cycling tours are among the most popular activities in the less touristy island area. However, cultural sightseeing tours in particular are becoming increasingly popular. Guests visit towns such as Montuiri, with its beautiful location on the mountainside as well as historical excavations from the Bronze Age and cave dwellings, or Sant Joian with the open-air museum "Els Calderers". So if you are looking for a quiet, in many places almost meditatively relaxing journey through the culture of the Balearic island, the centre of Mallorca is the best destination. With cycling and walking tours through the lush fields and groves, past secluded fincas with yoga retreats or stopping off at the area's cool wine cellars, you'll be well catered for, especially with a guide and his tales. Enjoy a sunny day in the granary of the Balearics and sample the many delicacies of the Spanish.

Recommended excursion tips to discover the centre of Mallorca

Stories from the center of the island - Glass blowing La Gordiola 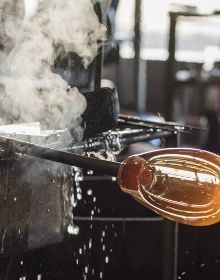 Glass-making has a long tradition on Mallorca - the oldest glass-blowing workshop in the centre of the island in Algaida tells of this. In a castle-like building, the workshop is also a museum. The Gordiolas, as the glassblowing family is called, have been producing glass art with the air of their lungs and the mobility of their hands for more than 300 years. Since 1718, the manufactory has been working in its medieval vaults to create the finest glass sculptures, magnificent vases with curved shapes and sometimes wafer-thin jugs. At one of the demonstration shows you can see live how small glass horses are created and a formerly private collection of the Gordiola family of the most beautiful pieces can be seen in the museum. Address: Carretera Palma-Manacor, KM 19.6, 07210 Algaida / Opening hours: Monday to Saturday from 09:00 - 18:30 / Sundays and public holidays from 09:30 - 13:30 / the glassblowers have lunch break from 13:30 to 15:00.
Mallorca discover by region Discover Mallorca - The West
Discover Mallorca- The island centre
We are using own and third-party cookies on our website in order to improve our services and to improve your user experience by means of evaluating your navigation habits. If you keep on surfing on our website we shall consider that you accept this use of cookies. You may change the configuration or get further information here.
×