The west of Mallorca is like another world: characterised by the Tramuntana, refuges of idyll such as Valdemossa and Deià, and enchanting bays. Gorge hiking, sailing, cycling, following the footsteps of Chopin, looking out to sea from the highest cliffs - the wildly romantic west is not comparable to the Mallorca of beaches.

Mallorcas West - from the Valley of Oranges to Puig Major

Whoever is on holiday in the warm south or the lively east will immediately notice the striking difference to the west of Mallorca. Like another island, the Tramuntana is at its peak. Anyone heading for the mountain range, which is a UNESCO World Heritage, will at some point step over the threshold into a completely different Mallorca. Here, green valleys, steep cliffs and romantic mountain villages dominate the picture. The Tramuntana mountains, which stretch from Andratx to Cap Formentor far to the north, are Mallorca's showpiece from a scenic perspective and, with their confluence of high peaks and steeply sloping coasts, a scenario of the first order.

Many gorges and valleys form panoramas on the mountain slopes that nature lovers and geologists alike dream of. Picturesque villages and small towns have developed in many of the territories that in times past were only accessible by boat. In the meantime, the west of Mallorca has been developed naturally; from Palma, you don't have to take the magnificent panoramic road along the west coast, but can also be in Soller through a tunnel in just 25 minutes. Nevertheless, it is the adventurous roads with crazy serpentines that invite you to follow the always fantastic views through the mountains. If you want to drive this adventure route, start in Andratx in the southwest and drive via Sant Elm, Banyalbufar, Estellencs, Valldemoosa, Deia, Sóller, Fornalutx. A beautiful way to get to know the west of Mallorca.

Besides this wild, rugged charm, the west also has very sophisticated towns. The harbour town of Port Sóller is definitely one of them. You can walk completely around the town's spacious bay on the chic waterfront promenade. In the associated harbour you will find numerous offers for boat tours. When you hear Mallorca West, you inevitably and rightly think of the Torrent de Pareis, the most famous gorge on the island. You can visit this natural wonder via an old smuggler's path, which also leads through a long tunnel. The only more adventurous place is La Reserva Nature Park, which specialises in exciting hikes.

The coastal road 710 has already been voted the most beautiful in Europe by the ADAC, and anyone who indulges in slowness on this route with its adventurous curves and charming mountain villages will understand why. A new panorama of Mallorca's wild west coast lurks around almost every corner. The start is in Port d'Andratx and the finish is the northernmost point of the island: Cap Formentor.

For nostalgics, the "Red Lightning" is a dream come true. The ancient Siemens railway runs over many mountains and through a total of 13 tunnels directly from Palma to the touristically flourishing town of Sóller. The town lies in a completely enclosed valley surrounded by orange plantations and interspersed with gardens, with the oldest railway station in the world and architecture from the Art Nouveau period.

This manor house with its romantic Carrara marble temple was commissioned by the Austrian Archduke Ludwig Salvator, Mallorca's first tourist. The imposing estate lines the cliff opposite the island of Na Foradada and forms a nature reserve with Son Moragues and the Miramar monastery. Son Marroig is popular as a backdrop for a marriage proposal or to get married in Mallorca.

One of the most beautiful mountain villages in Mallorca, this is no longer an insider tip, but a must-see on the island. Winding alleyways, well-kept stone houses, façades decorated with flowers and imposing buildings make this a top day trip destination. Valdemossa owes its fame above all to the Charterhouse and its most famous guests, Frédéric Chopin and writer George Sand.

A backdrop like a great wonder - that is the Sierra Tramuntana, which has been designated a cultural heritage site and shapes the island like no other landscape. Mallorca's largest protected area is a natural landscape full of character, which includes not only the approximately 90-kilometre-long mountain range, but also 62,000 hectares of land and 1,000 hectares of sea. The Tramuntana is Mallorca's backbone and a protective wall that, among other things, keeps a large part of the rain away from the rest of the island.

20 municipalities with around 8000 inhabitants - from Andratx to Pollenca - belong to this unique landscape. In the Tramuntana, besides the highest peak on the island - the Puig Major (1443 m), other giants rise such as the Puig de Massanella (1348 m), the Serra d'Alfàbia (1069 m), es Teix (1064) and the Galatzó (1026 m). Those who come here on holiday also come to test their limits. Be it on the challenging mountain roads or on the popular long-distance hiking trail GR 221 Pedra en Sec. The route is also known as the Stone Route or Dry Stone Route and measures a total of 280 kilometres to be covered in 8 stages.

Picasso and Princess Diana - the celebrities in the West

After physical exertion, the best place to revive your spirit is Deiá, the artist town in the west of Mallorca. What Chopin was to Valdemossa, Picasso was to Deia - a distinction. His presence and that of other celebrities made the place famous beyond the island's borders. Even Princess Diana relaxed among the ornate façades and multi-faceted architectural styles of this small dream village. Deia not only has mountain scenery and architectural monuments to offer, there is also a dreamy bathing bay, Cala Deia.

The western part of the island has a comparatively cool and often windy climate that sets it apart from the rest of the island. At the same time, the tranquillity of this corner of the island conceals some of the greatest treasures to be found. And amazingly, the most prosperous communities on the entire island have developed here in the seclusion of the Tramuntana. Banyalbulfar, among others, can be counted among them. The pretty village literally hangs along the mountains with its terraces and exudes so much charm that you don't want to take your eyes off it. Valdemossa has the best ranking of all Mallorca municipalities in the Spanish tax statistics every year. This is where the residents earn the highest incomes.

1. Torrent de Pareis - a highlight in the west. A hike through probably the most beautiful gorge on the island. It will be strenuous, but worth it. Experienced hikers cross the river bed, which is dry except for a few days a year, humbly following the 200-metre-high rock walls. The reward comes at the end: the sea.

2. Cami de Correus - one of the few hikes that start directly in Palma and take you into the Tramuntana. The guided tour leads along the old post road from Esporles to Banyalbufar. An experience in the seclusion of the mountains with wonderful breaks in the wild and romantic nature.

3. West Round Trip - You walk in the footsteps of Chopin, who brought some fame to the west of Mallorca when he spent a winter there. After a tour of the town, a coffee break and a visit to the museum, this day trip takes you via Sóller by Red Lightning to Port de Sóller and via Llucalcari, Deia and the famous rock hole "Sa Foradada" to Valdemossa.

4. La Granja - if you want to learn more about the history of Mallorca and especially about the life of the old Mallorcans, you will find many answers in the museum "La Granja" in Esporles. The country house from the 10th century lies in the middle of the Tramuntana and magnificent gardens.

6. Sa Calobra - if you like thrills, take the serpentines; if you like it relaxed, take the boat from Port de Sóller to Sa Calobra and after just under an hour you'll be at the entrance to the famous Paradise Gorge Torrent de Pareis.

7. Jardines de Alfabia - the gardens of Alfabia in Bunyola are a little surprise and a delight. The combination of country house, park and history flatters with Arabic influences, water features and manicured gardens. A visit to the 500-year-old country house reveals how Mallorca's nobility used to live. 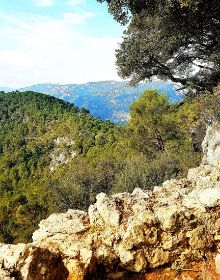 Even before refrigerators were invented, the locals took advantage of the snow in Tramuntana Mountains to produce ice. They built so-called snow houses "Cases de neu" in the mountains, where the natural coolant was collected, pressed into ice and stored to transport it down to the valley in summer. This was done by the snow sellers, a profession that still existed on the island until the beginning of the 20th century.
You can still admire some of these snow houses in the Tramuntana. Most of the ruins can be found around Puig Major, in the Massanella and Puig d'en Galileu massifs, below the peak of Tomir or in the area of Puig des Teix. If you want to know more about snow sellers and other traditional occupations on the island, visit the ethnological park in Caimari.
Mallorca discover by region Discover Mallorca - The Southwest
Discover Mallorca - The West
Discover Mallorca - island centre
We are using own and third-party cookies on our website in order to improve our services and to improve your user experience by means of evaluating your navigation habits. If you keep on surfing on our website we shall consider that you accept this use of cookies. You may change the configuration or get further information here.
×