Historical buildings and monuments on Mallorca

Embark on a journey into the past in Mallorca and get in touch with a more rural side to the island which is a far cry from the heaped holiday resorts that are so easily stumbled across. There are countless castles, palaces, monasteries and churches to cast your eyes on. They tell the history of the island in the best way possible and point back in time to show you how the locals lived and worked in the past and let you know just how much Mallorca has come on over the years. We have broken down the top 10 must-see historical monuments in Mallorca.

Tour Mallorca’s historic buildings and monuments and discover and unspoilt Mallorca which gets you closer to Mallorcan culture. Find out how the people of Mallorca lived, worked and prayed by wandering around the interesting buildings which still stand today. You can see just how religious the Spaniards are as you meander around the monasteries and potter around the pretty pilgrimage spots. Every spot has its own character which you’ll quickly become aware of. Most places can be reached by public transport whilst others are easier to get to by rental car. You’ll have to make the last leg of the journey on foot in some cases which makes it that bit more worth it when you make it there. 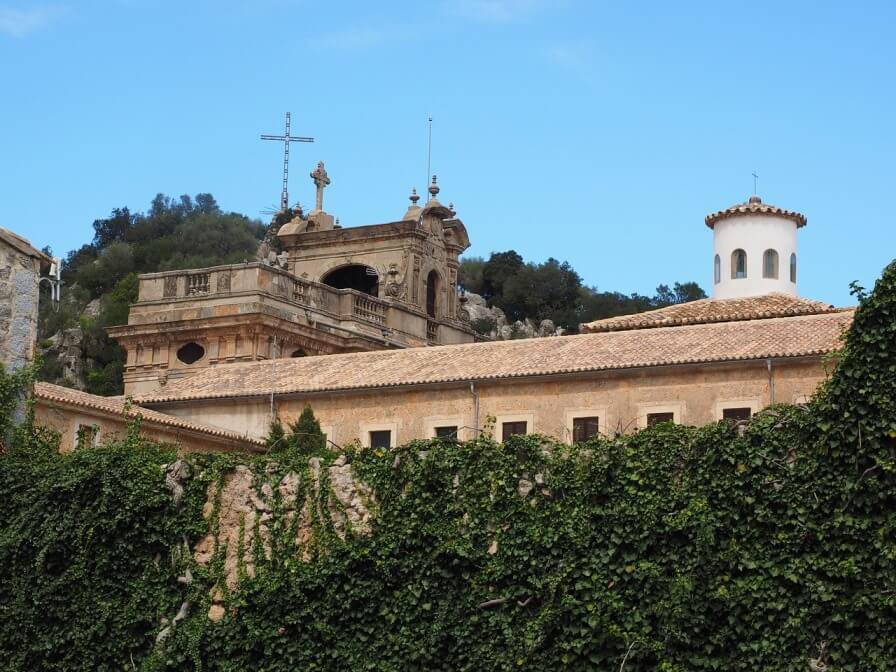 Santuari de Lluc is the best of the bunch when it comes to pilgrimage places in Mallorca. Legend has it that back in 1229 a statue of Virgin Mary was found here which led to the Monastery being built. Since then, the Santuari de Lluc has been a hot spot for many pilgrims. The monastery is now taken care of by the Brothers of the Congregation of the Sacred Heart of Jesus. It is home to a museum, a boarding school for young people and offers accommodation for visitors and hikers alike. The Santuari de Lluc Monsatery is based in a valley basin in the Tramuntana Mountains and stands at about 500 metres above sea level. You can get there on foot or by car. 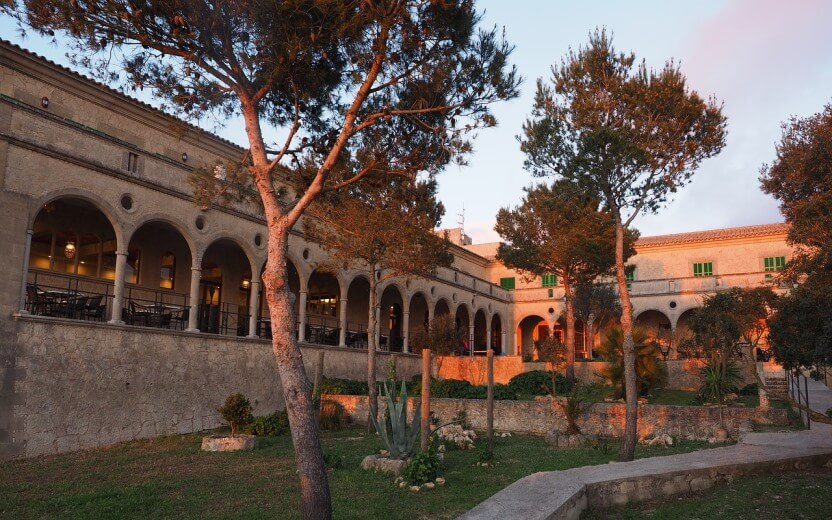 Get three in one when you make your way to Puig de Randa in Mallorca’s Table Mountain. The 1st church is based about 3kms away from Randa and finds itself on an overhanging cliff and houses a 15th-century Virgin Mary statue. The second church in Bergstrasse was founded in the 14th century and monks still live there to this day. The third and most impressive monastery “The Nostra Senyora de Cura” is almost at the peak of Puig de Randa. Franciscan monks started building it back in 1275 and it’s been a retreat spot for those on the lookout for peace and quiet ever since. The philosopher and theologian Ramon Llull slipped away here to write more than 27,000 pages on religion and philosophy. The Franciscan Order still take care of it today. The view from up here is simply stunning and well worth the trip. Although Puig de Randa is not the highest mountain in Mallorca, it is centrally located so you get a great view of Palma, the Tramuntana Mountains and Cabrera Island. 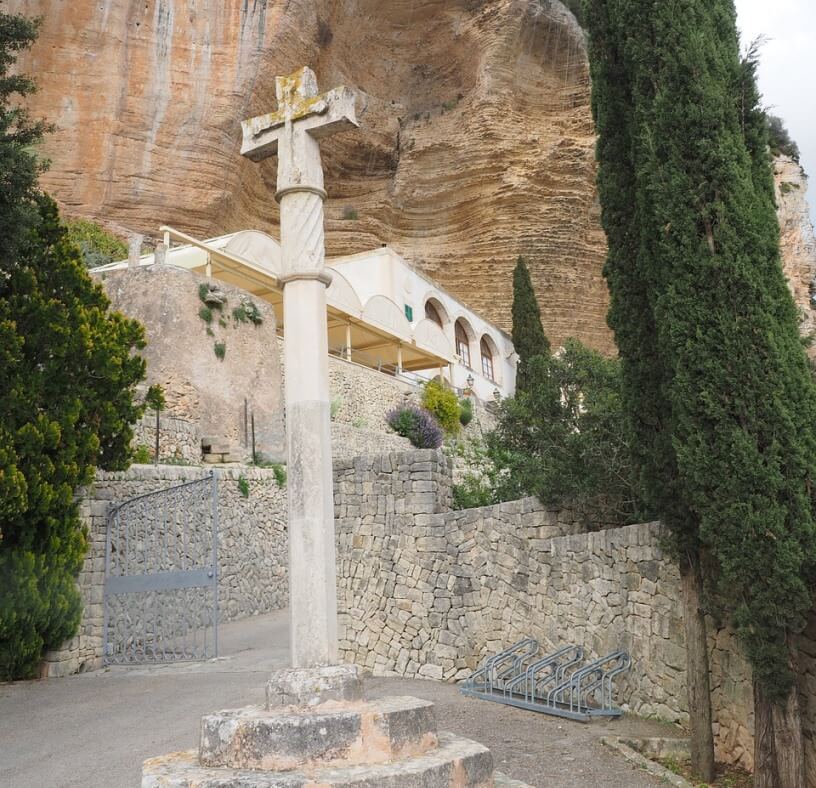 The Ermita de Nostra Senyora de Puig on the Puig de Maria Mountain has been around since 1348. It’s said that a statue of the Virgin Mary was found there, and it was so heavy that it couldn’t be moved into the valley. Nowadays, nuns run the monastery and live in the 330m-high Puig de Maria mountain. If you fancy a terrific trek, take a hike up the mountain and reach the marvellous monastery in about an hour. If you’re not feeling that, then drive up as far as you can and walk the last bit (approx. 15 mins). 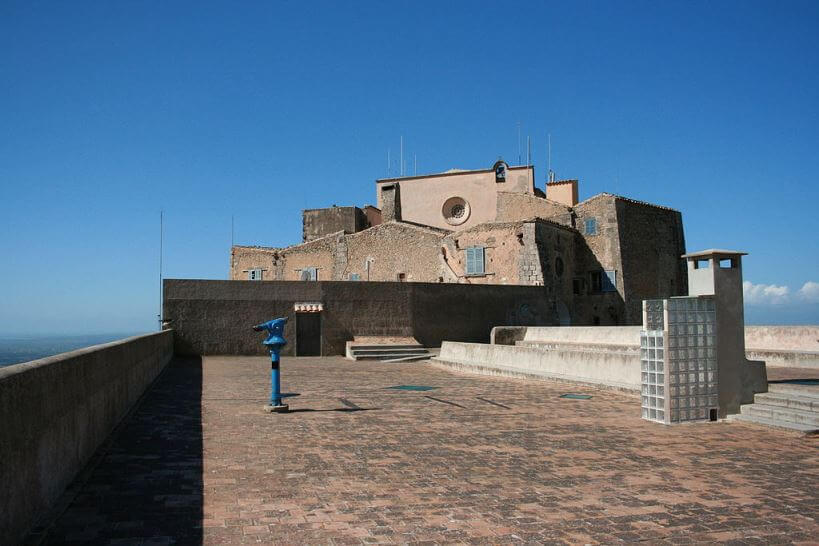 Sant Salvador near Felanitx treats hikers and pilgrims to a postcard-perfect view. This time you’ll be checking out the south-east coast in Mallorca. The magnificent monastery is often mistaken for a castle because of its intricate design. On the 500m-high mountain there is also a 37m-high column with a 7m-high statue of Jesus Christ. The Monastery of Santuari de Sant Salvador can easily be reached by car. If you fancy it, stay overnight in the former monk cells. 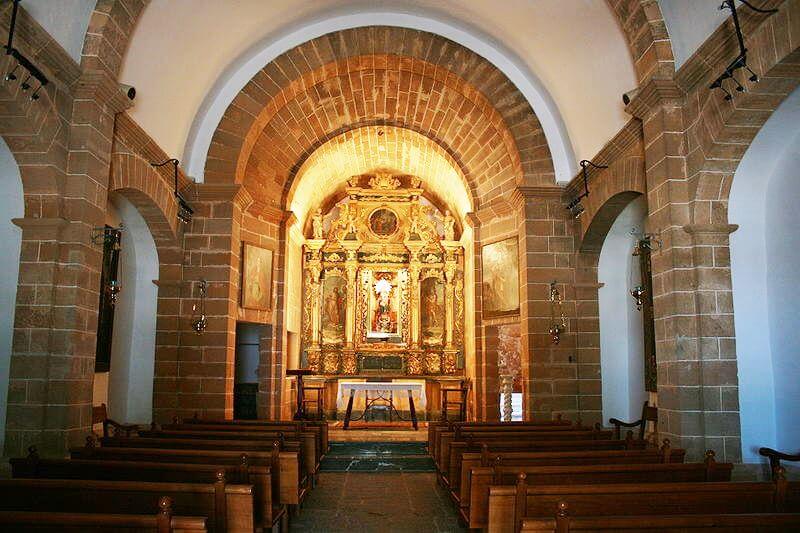 Make your way to the north side of Mallorca and get up close and personal with the Ermita de La Victoria. Get treated to amazing views over the Cap de Formentor and Pollensa and its blissful bay. The building was built in the 14th century by the Bishop of Palma and inhabited by an alchemist by the name of Diego García. Christians come to worship at the statue of the Virgin Mary. The story goes that the sacred statue was stolen several times by pirates, but it kept getting recovered time and time again. The Ermita de la Victoria is one of the quieter places of pilgrimage on the island, spend the night there if you want to complete the experience. 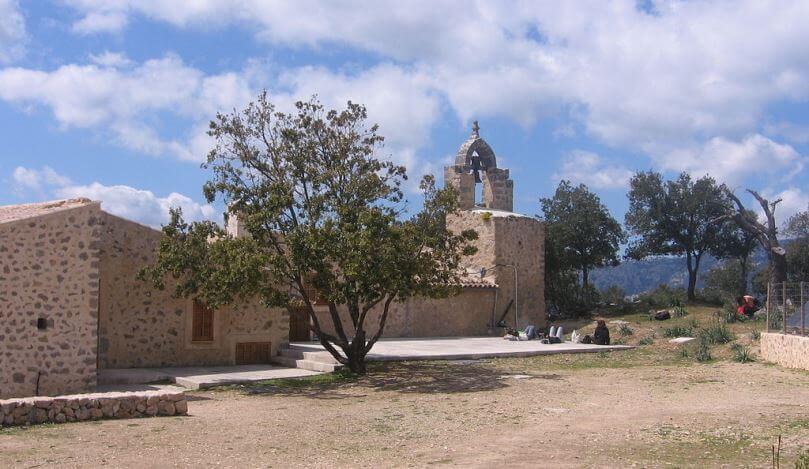 Castell d' Alaró was mentioned in writing as far back as 902. The fortress was built to protect Mallorca from a military perspective. The Castell d’ Alaró was used as a military hospital during the plague in 1564. A chapel was then built there in 1662. Since the demolition of the Kingdom of Mallorca, the building has only been used as a religious site. The fortress has been considered as a Spanish cultural monument since 1931. The ruins of the castle are at an altitude of 825m and can only be reached on foot. You can look across to Palma from way up there. 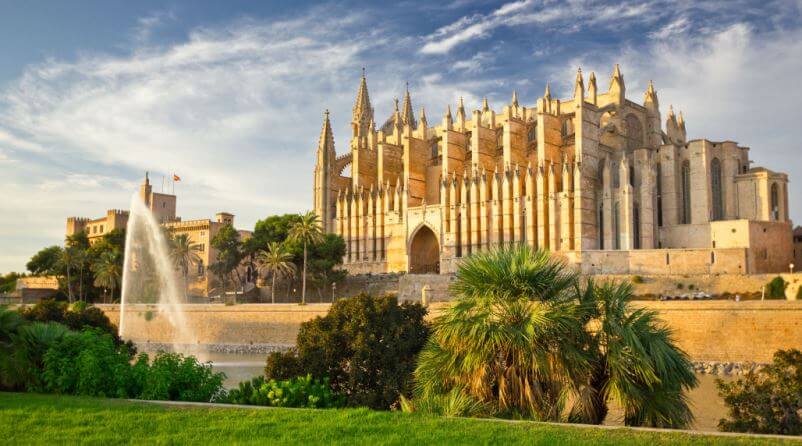 The Cathedral of La Seu is probably the most important building in Mallorca. The beautiful building is the emblem of Palma and a stunning example of Gothic architecture. The cathedral stretches across 120m and has 67m-high towers. It is said that King Jaume I laid the very first brick way back in 1230 but that it took until the 17th century for the cathedral to be completed. In the 19th century Antoni Gaudí put his hand to it and made it what it is today. You should visit the cathedral in the morning and in the evening as well. In the morning, feast your eyes on the stunning light show where the sun rises and shines through the special stained-glass windows. In the evening, the sunset glows over the impressive Cathedral and sets the tone for a peaceful and cultural treat. 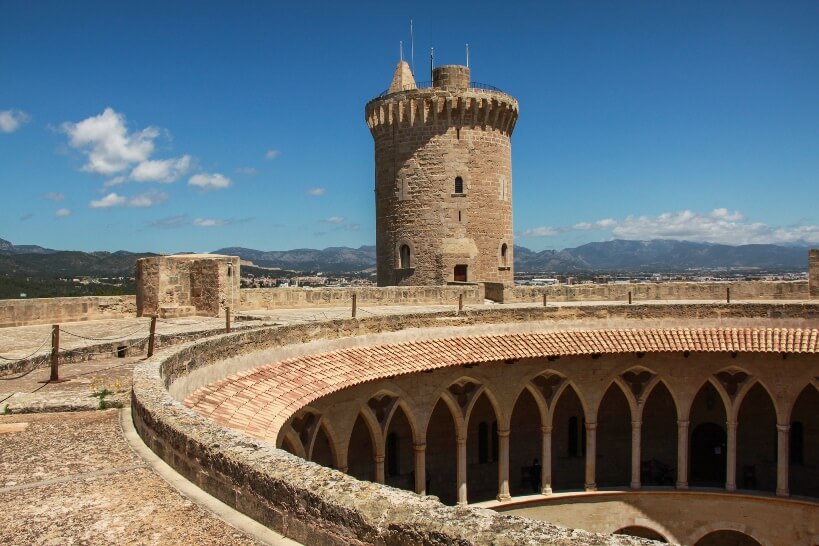 The Castell de Bellver sits on a hill in West Palma. The pretty castle was completed in the 14th century and its intricate design is unique to Spain. Over the centuries the castle has served as a residence, a refuge from the plague and a prison for insurgents, pirates and disliked royal family members. Today you can visit the Castell de Bellver and explore its small history museum with its original rooms. On top of that, you have a beautiful view Palma and its beautiful bay. The Castell de Bellver can be easily reached by car, on foot or on one of Palma's city buses. From the bus stop it is only a 15-minute uphill walk. 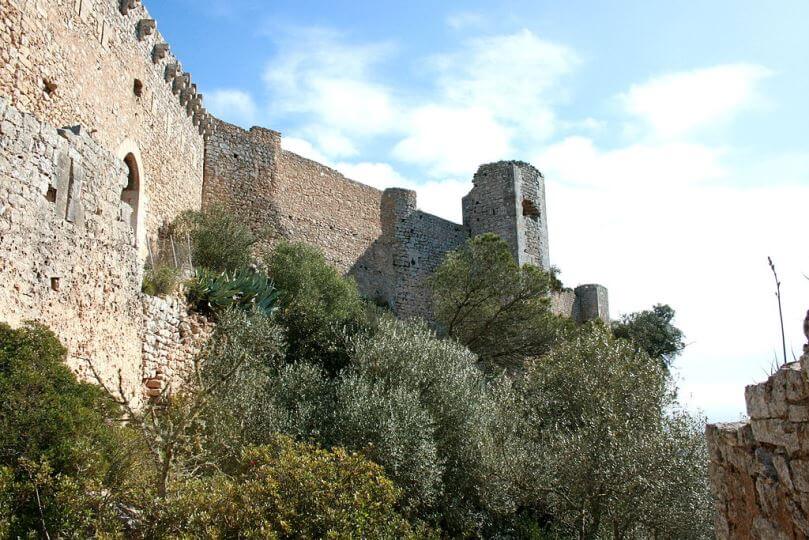 The Castell de Santueri is what’s left of a former Arab fortress. It stands on a platform in the mountains and it was where the Romans had watched over the east coast from. The Arabs later built a fortress and fiercely resisted King Jaume I's conquest of Mallorca in the 13th century. The Arabs finally surrendered when the fortress was on the verge of being destroyed. A new castle was built during the 14th century to serve as protection from the pirates, this started to crumble away from the 18th century. The Castell de Santueri is located between Felantix and S' Horta on the Puig des Carritxó; follow a long winding road to reach the ruins. 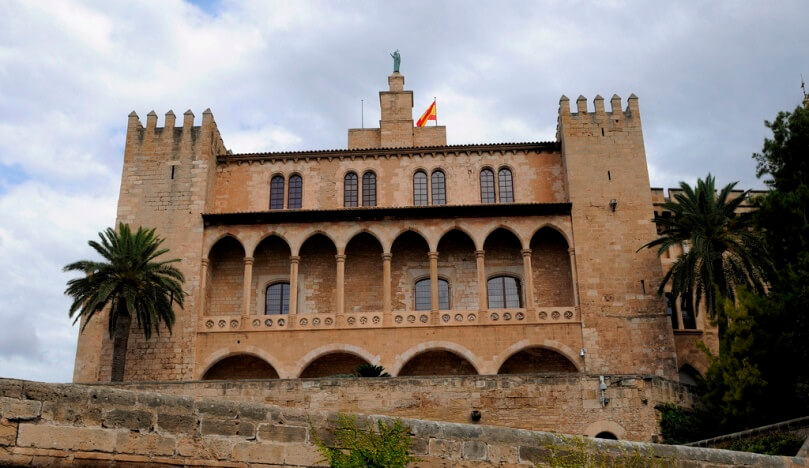 The Palau de L' Almudaina is right next to Palma Cathedral. It used to be an Arab fortress where the Islamic rulers lived in Mallorca. When Mallorca was reclaimed by King Jaume I in 1229, the fortress was destroyed and rebuilt as a palace. Some of the Arabic artefacts have been left behind in the palace. The Palau de L' Almudaina is the official residence of the Spanish royal family and they use it to host official events. You get discounts on admission to other cultural attractions in Mallorca with this ticket as a little treat!

Mallorca Sightseeing & Culture Top 10 Museums of Mallorca
Historical buildings and monuments on Mallorca
Mallorcas weekly markets
We are using own and third-party cookies on our website in order to improve our services and to improve your user experience by means of evaluating your navigation habits. If you keep on surfing on our website we shall consider that you accept this use of cookies. You may change the configuration or get further information here.
×