The best selection of sightseeing tours in Lanzarote

Get an overview of the best offers for sightseeing & culture in Lanzarote. The guaranteed best selection of tours island wide. Island tours, bus tours and boat trips. Book your ticket for your sightseeing tour now here at a lower price here. 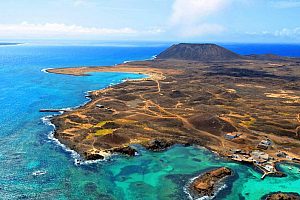 To the island of Lobos from Lanzarote: boat trip with dolphin watching

Discover the fascinating neighbouring island of Lobos on a boat trip from the east of Lanzarote. The island with its impressive volcanic landscape is a nature reserve and worth a visit. And the best part is, the probability of spotting wild dolphins on the crossing is high! With pickup from the south and east! 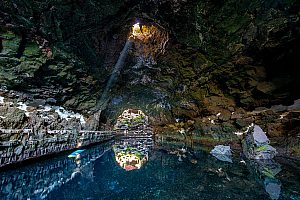 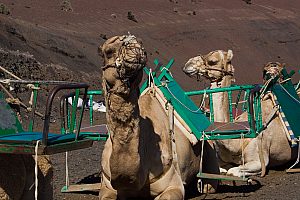 Explore the stunning natural beauty of Lanzarote on this short tour to the National Park Timanfaya and the wine region La Geria. Camel ride possible! Ideal tour for families with children, transfer is included. 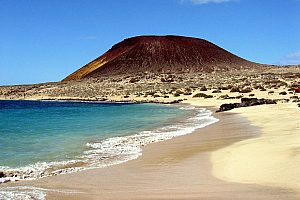 On this guided half day tour to La Graciosa, the stunning island in the north of Lanzarote, you'll get to know the pristine nature of the Canary islands. The La Graciosa tour starts in Lanzarote, incl. transfer from your hotel, paella eating and a catamaran tour! 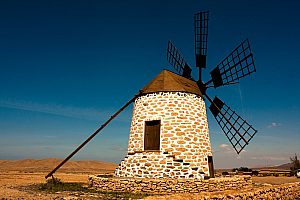 Exciting Lanzarote day trip to Fuerteventura. From Playa Blanca you take the ferry to Corralejo. On the neighbouring island, a varied sightseeing tour by bus awaits you and you will explore Fuerteventura's island centre and the north. Transfer from the East and South of Lanzarote included! 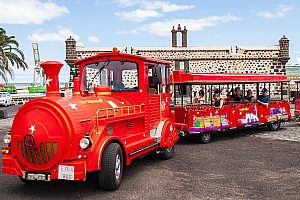 Arrecife sightseeing tour with Hop on Hop off city train

Discover the island capital of Lanzarote during Arrecife Sightseeing. The Hop-on-Hop-off city railway connects the most important destinations and sights of Arrecife on 2 routes with 16 stops. The 24-hour ticket includes train ticket, snack, drink, souvenir and access to San Jose Castle. 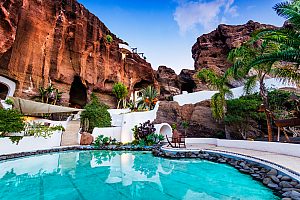 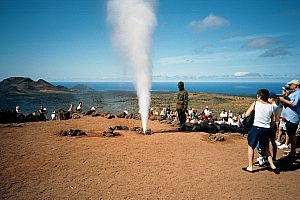 Guided full-day tour in Lanzarote with the most famous and popular attractions as well as the possibility for a camel ride. Get to know the whole island in one day on this amazing round trip in Lanzarote.
3 Reviews

Take a bus to the beautiful Playa Blanca market in Lanzarote, where you can enjoy the bustle and variety of traditional products and crafts. Afterwards you have another two hours to explore Playa Blanca with its beautiful beaches on your own. 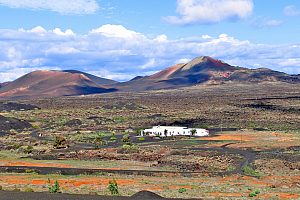 Wine in Lanzarote: discover La Geria with a bus tour

Get to know the most important wine-growing region "La Geria" on Lanzarote during a bus tour and visit three of the oldest wineries (Bodegas). After exquisite wine and tapas, there is still time for the farmhouse monument of César Manrique. 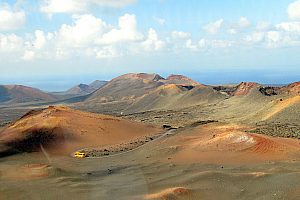 Exciting tour through the unique volcanic landscape of the Timanfaya National Park on Lanzarote followed by a barbecue and a visit to the exclusive marina in Puerto Calero. The tour lasts about 5.5 hours and includes park entrance, transfer from tourist places on the east coast, a guide and BBQ at the ranch. 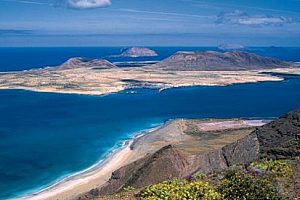 Discover the aesthetics of this beautiful volcanic island in the footsteps of the artist César Manrique. With this day trip, you can take in his unique works of art:"Monumento al Campesino", via Teguise,"Mirador del Río", volcanic caves, cactus garden and the Manriques Foundation. Lunch on the way is optional. Let César Manrique's creativity surprise you on the extensive tour of Lanzarote. 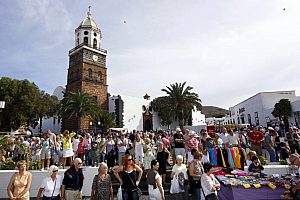 Experience the popular Teguise market on your own. A bus will take you from the south and east into the interior of the island and you can immerse yourself in the colourful market. Handicrafts, local specialities and much more await you. As an option, you can also visit the famous César Manrique Foundation.

Market visit in Teguise on Lanzarote and excursion to La Graciosa

Experience a wonderful day full of freedom and impressions when visiting the market in Teguise on Lanzarote. After some time at your leisure, you will follow the guide and take the ferry to the island La Graciosa. There you have plenty of time to roam the enchanting island. Lunch and drinks included. 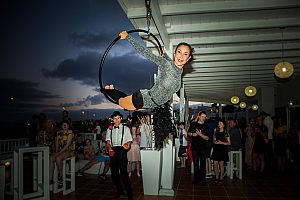 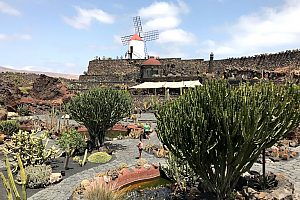 Lanzarote offers a wide range of sightseeing tours, we have the best selection for you at a guaranteed best price!

Would you like to explore the most important sights in one day? Then a full day island tour in Lanzarote is what you are looking for. You will be picked up in the morning from your hotel or near your accommodation by an air-conditioned coach. A professional and multilingual tour guide will take you to the most important sights, including the Timanfaya National Park, Los Hervideros, Jameos del Agua and El Golfo. Furthermore, the tour route takes you to the famous church Nuestra Senora de los Dolores and to the wine growing area La Geria.

You do not want to be on the road all day or come to Lanzarote by cruise ship? Then we also offer a short south tour, where you will be back at your hotel or on your cruise ship in the early afternoon. Also on this tour you will visit the most important sight in Lanzarote, the Timanfaya National Park, where you will have the opportunity to ride camels at the fire mountains (not included). The short tour of the island will then take you to the wine region La Geria. A wine tasting awaits you in a traditional and original wine region. This tour is ideal for cruise guests because of its duration, a pick up from the cruise terminal in Arrecife is easily possible.

On a north or south round trip of Lanzarote you can get to know some of the regions of Lanzarote during a full day tour. The South Roundtrip takes you to the most beautiful places in the south of Lanzarote. You will visit the Timanfaya National Park, the green lagoon "La Laguna verde", El Golfo, the Salinas del Janubio and the wine growing area La Geria.

The North Tour takes you to the most beautiful places in the north of Lanzarote to San Bartolomé, the oasis LagOmar, the island capital Teguise, the Famara Mountains and a traditional Aloe Vera Farm. On the way back you can also admire the Jameos del Agua and have the possibility to visit the Cesar Manríque Foundation.

If you want to take advantage of the excellent shopping facilities and discover Playa Blanca or Costa Teguise, you can also book a bus shuttle to the Teguise market or a shuttle to the Playa Blanca market. In addition to numerous boutiques and souvenir shops, a wide range of traditional and local handicrafts await you. You are free to arrange your programme in the coastal towns before you are taken back to your hotel in the early afternoon

The best way to discover Arrecife, the capital of the island, is by taking the hop on hop off train. You can use your ticket flexibly within 24 hours and see the main sights in Arrecife. The price includes some entrance fees, a souvenir, a drink and a small snack.

On the traces of César Manrique

Numerous popular tourist attractions in Lanzarote were designed by the artist César Manrique, which significantly influenced the image of the Canary Island. Besides the farmer monument "Monumento de Campesino" Cesár Manrique was also responsible for the design of the volcanic caves "Jameos del Agua". In all of Manrique's works of art, his connection to nature and the volcanoes is evident. During a César Manrique tour we will take you to all the important works and to the foundation of this unique artist.

The smallest inhabited and very original Canary Island La Graciosa, is reached after a 30-minute ferry crossing. The island lives mainly from fishing and tourism. There are hardly any paved roads, as only the off-road vehicles of the locals are allowed. La Graciosa gives by these circumstances the possibility to discover untouched nature and a unique landscape. During a sightseeing tour to La Graciosa from Lanzarote we show you the most beautiful sights of the neighbouring island. You can combine the trip to La Graciosa with a market visit in Teguise.

From the neighbouring island Fuerteventura you are only separated by a 30 minutes ferry crossing. On a day trip with island sightseeing you can see the most important sights of Fuerteventura during a bus tour. In addition to the dunes of Corralejo, you will also be taken to a traditional Aloe Vera plantation and a cheese plantation. The transfer from your hotel and the ferry crossing from Playa Blanca is included, so you don't have to worry about anything else.

You can explore the nature reserve of the neighbouring island of Lobos by boat. The island of Lobos is considered a snorkeling paradise because of its crystal clear water and is appreciated by visitors because of its beautiful and untouched nature. Lobos has no permanent islanders, but some fishermen have weekend houses there and use the paradise island as a retreat and recreation area.

sunbonoo wishes you lots of fun on your sightseeing tours on Lanzarote!