Mallorca Activities Mallorca with children
Cycling on Mallorca
Mallorca and the bicycle go very well together. When the low season shines with pleasant temperatures, cyclists set off in all directions: some uphill, others downhill. The route network measures more than 1000 kilometres - plenty of scope for ambitious cyclists and leisurely family outings.

On the last few metres you may curse the incline or the headwind, but at the latest when the climb is behind you, the endorphins return: cycling in Mallorca makes you happy and it trains the body as well as the mind. The network of cycle paths on the island has enough distance for every kind of ambition. Professional racing cyclists and city bikers have equal sympathies for the sunny island. Some scrub kilometres on the mountain here every day, others do sightseeing in the saddle. You have to know that cycling is almost a kind of national sport for the Spanish. You will also meet locals on many routes who do their daily round.

Cycling on Mallorca - that is pure enthusiasm. Especially in the low season, when the temperatures are still pleasantly mild and the roads are almost clear. The big cycling teams have also chosen the Balearic island as a popular training camp and use the spring to prepare here in ideal conditions. Amateurs and hobby athletes can also be found in large numbers at this time to shorten the winter at home and to collect the first rays of sunshine during a cycling tour through the almond blossom. Cyclists are often the first to arrive on the island in spring and the last to soak up the sun in winter. Many hotels and service providers have adapted to the athletes.

Mallorca's versatility benefits cycling and its supporters. Where else do you have the opportunity to cycle through the flatlands by the sea, take a mountain bike tour through the mountains or work your way up one of the monastery mountains in one day? On Mallorca, everyone can find their dream route and, if their own doesn't fit on the plane, their dream temporary bike: road bike, mountain bike, trekking bike, e-bike - you can rent everything on the island or have it reserved for a guided tour. This is practical if you are on a cycling holiday in Mallorca with your family and need good equipment for everyone. A mecca for cycling on Mallorca is the east and northeast. Here, cycling events also take place in early summer. But for cycling tours, any of the coasts on Mallorca is actually suitable:

Selected routes in the north of Mallorca: 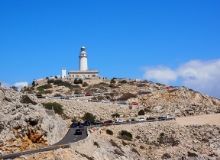 If you are an experienced racing cyclist and are looking for a route with a bit of effort, you only have to go to the northernmost tip, Cap de Formentor. The starting point of this route, rich in views, is Playa de Muro. From there to the Cap and back again is about 90 kilometres, on Formentor mostly via the narrow serpentines. If you want to take a shorter route, you can start in Port de Pollenca and reach the cape on the 18-kilometre route from there. In both cases, it is worth stopping at the Mirador Es Colmer. A great cycling tour for beginners or families leads through the s'Albufera nature park, which is about 6 kilometres from Alcudia (northeast). The park is closed to cars, so you can enjoy nature in complete peace. Numerous species of birds and plants can be marvelled at here, and in the park's visitor centre you can interrupt your bike tour for a short break to learn more about Mallorca's flora and fauna. There and back you will cover around 30 kilometres on flat paths.

Selected routes in the west of Mallorca: 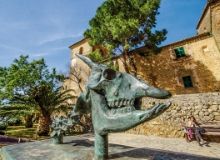 If you get on your bike in the west, you can't avoid ascents and descents, because we are at Tramuntana level. A great coastal route (MA10) leads from the small artists' village via Valdemossa, Esporles, the small vineyard Banyalbufar and Estellencs to the southwest to Port Andratx. Along the way, spectacular views of the sea and the mountainous landscape of Mallorca. The Tramunatan tour is very popular with trained racing cyclists, but ambitious leisure cyclists can also manage this route. 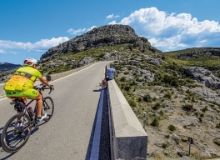 It starts inconspicuously and becomes a real test of endurance with 2341 metres of altitude. With two of the toughest mountain passes in Mallorca, this bike tour is only suitable for people who are free of vertigo and trained. From Port Sóller, the route goes almost straight up to the Puig Major, past the Cúber and Gorg Blau reservoirs and up to the Coll des Reis mountain pass and finally down the serpentines to Sa Calobra. If you have had enough of cycling there, you can take the boat back to Port Sóller.

Selected routes in the south of Mallorca: 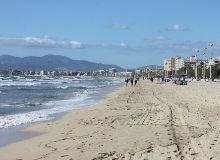 A bike tour for pretty much every target group and every age. The path along Playa de Palma is asphalted throughout, pleasant to ride and car-free. The total length is 28 kilometres without any notable climbs. This gives you enough time to follow the coastline and take a leisurely look at the many stretches of beach. Portxiol and El Molinar in particular are always busy. In Can Pastilla it is worth taking a short break before continuing along the promenade to Arenal. Of course, this easy cycling route also works in the opposite direction for a day trip by bike to Palma. 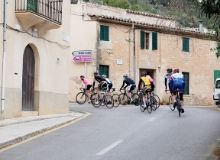 A beautiful destination in the centre of the island is the monastery mountain Randa (542m) with the Santuari de Cura monastery. If you struggle up there, the east coast and large parts of the centre of the island are at your feet. The beauty of this tour is that it runs mostly on low-traffic side roads and through some interesting villages in the centre of the island: Llucmajor, Petra, Montuiri, Sineu (market on Wednesday) Algaida. With a little more than 750 metres in altitude, this bike tour is not too difficult to conquer. For a break, it is basically worth stopping at each station.

Selected routes in the east of Mallorca: 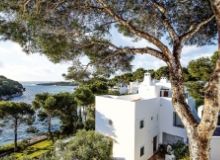 At an altitude of 509 metres, the former monastery Santuari de Sant Salvador is perched on the mountain of the same name - a place for Mallorca lovers who get a stunning view of the island from the very top. We reach Sant Salvador a little halfway. After starting in Cala d'Or, we first drive to the small village of Felanitx with pretty alleys and a large church. Then we head towards Porto Colom and look out for the signs to Sant Salvador. From there we take a short detour to the harbour in Port Colom and then back towards Cala d'Or. 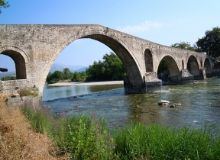 The "green way" between Manacor and Arta in the east of the island was once a railway line before it was converted into a cycle path. The Via Verde is part of a project of the same name that converts old railway lines in Spain and Mexico into attractive cycling and hiking paths. On this relatively flat, almost 29-kilometre-long route, you follow picturesque hilly landscapes, traditional villages, old olive groves and 20,000 newly planted trees or plants. The path becomes a goal.

Around 200,000 cyclists come to the island every year, whether for intensive training, the start of the season or a cycling holiday. And the cyclists bring money to the island. According to media reports, the industry generates a turnover of around 300 million euros. It might be easier to get over the fact that motorists are often left behind when the cycling teams take over the roads. Due to the boom, the island government has spoken out in favour of new and safer cycle paths - until now, cyclists have had to share the roads and byways with motorised traffic. More than 200 hotels on the island have adapted to the target group of cyclists and have rental stations, road bike cellars, workshops or fitness offers for cyclists.

Mallorca Activities Mallorca with children
Cycling on Mallorca
We are using own and third-party cookies on our website in order to improve our services and to improve your user experience by means of evaluating your navigation habits. If you keep on surfing on our website we shall consider that you accept this use of cookies. You may change the configuration or get further information here.
×