The best prices for tours in Palmar 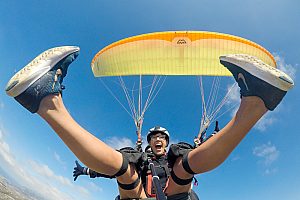 A thrilling adventure over the sea: Take off for tandem paragliding on Tenerife. You float over the south of the island, including Barranco del Infierno, at an an altitude of between 800 and 1,000 meters. Start from Ifonche or Taucho. Accompanied by a professional pilot.