Have the time of your life in Galicia and book everything you want to do online on sunbonoo.

Try out the most booked activities

Exclusive: Romantic night on a sailing boat in Vigo with dinner

All Sightseeing & Culture offers All

All Boat Trips offers All

Ask our native speaking team anything

All Adventure Holidays offers All

You want to change your tour? No problem

All Sport & Activity Holidays offers All

We guarantee full refund within 24 hours

All Food & Drinks offers All

Because you deserve it

Hand-picked things to do

Getaway to Galicia: Pop along to a botanical garden in Pontevedra

Wine tour in Galicia: The most famous wineries in Albariño

Full day sightseeing tour in Galicia with an SUV

Paintball in nature in Galicia: Action on the field 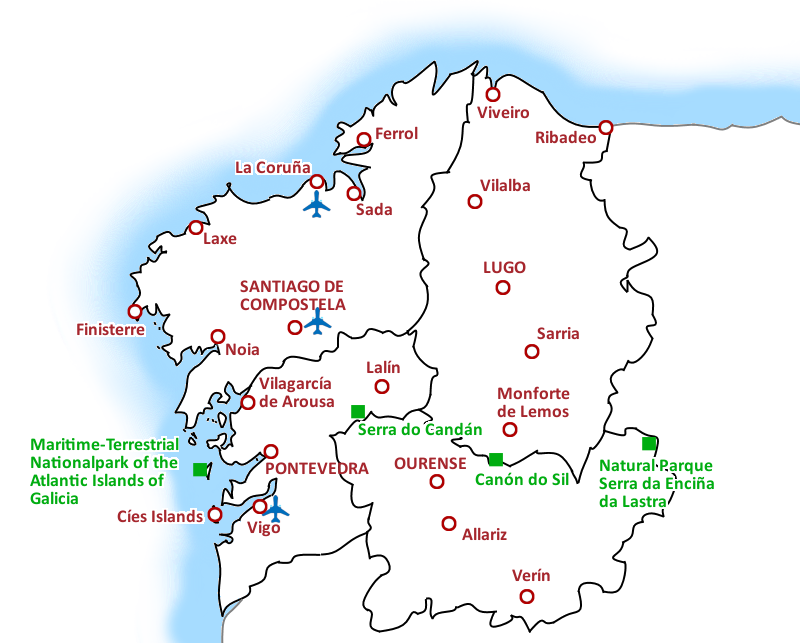 Tours and activities in Galicia: find, plan, enjoy your holiday

To make the most of your holiday and avoid any unexpected surprises, we recommend pre-booking tours and activities that you want to do during your stay in Galicia. Avoid the disappointment of sold-out shows, tours or activities and, on top of that, save money as you get the best prices with sunbonoo. Manage your holiday budget, cut out the need to overspend and get first-rate customer service.

Get everything sorted out months before your break in Galicia. Scroll through and pick from over 100 things to do from the comfort of your own sofa. The Northern coast of Spain is just waiting for you to check it out. Book the best tours and activities in Galicia for you and all your friends and family. If you’re struggling to think of what to get someone as a present for their special day, look no more as sunbonoo tickets make great gifts!

Sort out everything beforehand for your holiday in Galicia online

The Way of St. James which is more commonly known as the “El camino de Santiago” really put Galicia on the map and if it weren’t for this, perhaps, Galicia would have remained a Spanish secret. Thanks to a wide array of activities and tours in Galicia, you get the best out of the county! The list of things to do keeps growing and growing which means you’ll never run out of options on holiday. See another side to Spain as you mission through the mountain ranges and wind your way around its waters!

There is more to see and do in Galicia than first meets the eye. Whether you’re a hiker, a family man, an avid golfer or a culture vulture – there’ll be something right up your street! With the terrific tours and adventure-filled activities in Galicia, you make your holiday one to remember. Make your lives easier and instead of stressing yourselves out, book everything in advance and online. This saves you not only time and money, but it also means that when you show up in Galicia you don’t have anything other than enjoyment to think about. Put your mind at ease with insurance when you book by credit card.

It’s almost impossible to go to Galicia and not be tempted by its wonderful waters! Boat trips and water sports are a must if you want to take advantage of the beautiful beaches. To all the surfers out there, there are a more than a fair few waves to catch on the coastline that just goes on and on! See the sights of Western Spain from a different point of view by hopping on a boat trip in Galicia. Be a part of the magic that seems to hide behind every corner on the dreamy Cíes Islands which have been referred to as the islands of the Gods for quite some time.

Get into the thick of Galicia by doing sightseeing day trip tours. The Costa da Morte and Finisterre tours take you along to the alleged end of the world which as far as the Romans were concerned was the westernmost point of the World. As you can imagine, from this point, you are treated to nothing short of breath-takingly beautiful views across the seemingly never-ending ocean.

A classic way to enjoy Galicia is by tasting the local food and sitting down to talk over tapas. Galicia is well-known for its delicious delicacies. The octopus is out of this world - don’t knock it until you’ve tried it! Another favourite is the wine, find out all there is to know about the winemaking process by setting out on a wine tour.

If you’re a fan of culture or see yourself as a bit of a history buff, you’re sure to delight in travelling back in time and seeing a side to Galicia which is practically untouched and unchanged from many moons ago. Set your eyes on Santiago de Compostela and stroll around the city which is a World Heritage Site. Get acquainted with the pretty Pontevedra by taking a boat ride along the Ría de Pontevedra where you’ll get to see the Rías Baixas enroute.

There are many kid-friendly activities in Galicia. The Parque Acuático is a wonderful water park which is not only a no-brainer for the kids but turns out to be a fun-filled day out for the whole family. Get your kids closer to nature and let them understand humans impact on sea life by taking them along to the Aquarium Finisterrae: it goes against the grain as it doubles up as an interactive marine biology and oceanography centre. It goes without saying that kids can take part in sports in Galicia, there are various surf camps which are especially suited to children and teenagers.

Go rafting on the Miño River or set out on a catamaran trip through the Sil Gorge and get to know a more rustic side to Galicia!

Galicia is well in touch with wellness. There are plenty of thermal baths and over 300 springs! Pop along to a spa and get some relaxation therapy as you get to know the real health benefits of the warm mineral water.

Rent a car and have the whole of Galicia at your fingertips. When you get tired of driving, give yourself a break and hop on a tourist train instead. There’s a lot to see in Galicia from lighthouses along the coast and verdurous vineyards to amazing architecture in the cities!

The sunbonoo team wish you a happy stay in Galicia!