Have a blast on a buggy tour in Tenerife and save yourself from getting stressed by sorting it all out online. Speed along by the sea and sand and experience the island from a new perspective. Guided buggy tours on the Canary Island of Tenerife are available from €35 a head. You don't speak Spanish? It’s not an issue as the tour guides speak English. 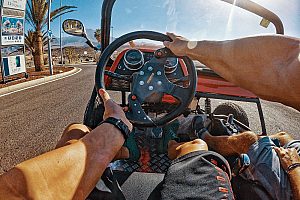 On this buggy tour on Tenerife you will drive open, all-terrain buggies with manual gears to Mount Teide, then head along the coast and visit many other sights in the south of the island. Various tours can be booked, which last between 1½ and 4½ hours! 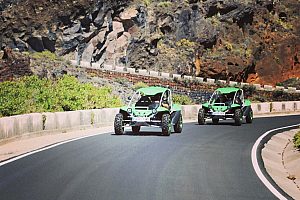 The 3-hour buggy tour on Tenerife takes you to the charming mountain village of Masca. You get through a breathtaking scenery, up the mountain roads and around the famous Masca Gorge. Transfer, water, snacks and guide included.

Buggy Tours in Tenerife are cheaper online with sunbonoo

An expedition of a special kind: explore Tenerife's wonderful natural landscape on a buggy and set out on a thrilling adventure which provides driving pleasure from start to finish on a guided tour. The powerful machines, which are somewhere between a go-kart and a quad glide over every terrain with no strain.

Jump on a buggy tour and dive head-first through Tenerife's dense pine forests and picturesque villages, you will drive on wicked winding roads and stunning coastal lanes. Let the breeze blow through your hair and marvel at the amazing scenery which is something to really rave about. Take a breather and some pictures at the stops along the way.

The local guides will be at your side throughout and they'll bring you up to speed on everything from the island's history and culture to the geographical side of things. You'll be taken aback by how much you'll learn as you ride around on a buggy in Tenerife.

Tenerife has many pretty places worth seeing and every path has its own charm. If you want to discover the natural scenery in the middle of the island, then the Teide Tour is your best bet. You'll head for the hills and get the chance to crank up the speed a bit on the dirt tracks. If you don't want to lose sight of the sea, pick the coastal roads to the south of Tenerife and enjoy the amazing Atlantic landscape with its impressive cliffs and special sandy beaches.

Most buggy tours in Tenerife start in the south of the island. Costa Adeje is one of the most important starting points, both for the tours to the national park and along the coast.

1. The extensive Buggy Tour Tenerife takes you from Costa Adeje to the top station at the Teide at an altitude of 2200 metres. The way is lined with charming landscapes and you get treated to diverse and verdurous views from every angle.

You will pass the spectacular Los Gigantes cliffs, jet over dried lava and fantastic forest paths. With Vilaflor, you get to know the highest village in the Canary Islands - it's a true historical gem. Have a snack before you head back.

This tour is do-able all-year-round!

2. If you aren't keen on doing a longer tour, you could take the Buggy Express up the Teide instead. You take a shortcut and in just three and a half hours you get exposed to many facets of the island with the impressive Teide National Park and some of the most charming villages on the south and west coast.

The viewpoint Cañadas del Teide is one of the highlights of this buggy trip. You can see the top of the volcano from up there and delight in a panoramic view of the entire island.

This tour is possible all-year-round!

3. Buggies are brilliant are the perfect mix of sightseeing and adventure rolled into one. There are almost no limits and you can cruise in peace across a whole host of different terrains. A coastal tour with a buggy in Tenerife is one of the most beautiful experiences on the island, because you have the freedom to move around with little to no restriction whilst picking up a decent amount of air from the wind. From Costa Adeje there are bundles of blissful bays, beaches and viewpoints to check out.

This tour is available all-year-round!

Useful hints and tips for buggy tours in Tenerife

The briefing before a buggy tour is obligatory. Professional guides explain how to handle the marvellous machines. Everything they tell you is for the benefit of your own safety so please follow their instructions. They know the roads and the terrain like the back of their hands and they also know how to have a laugh, so you get the best of both worlds.

Children over 6 and over 135cm are welcome to take part as passengers which means that buggy tours are an awesome option for family holidays.

If you want to drive, you must have a driving licence and you must bring it with you. If you and your buddy both have a licence then mid-way through the tour you can switch seats so you both get a shot at driving.

A cloth as a mouth guard and protective goggles come in handy when you ride over dusty dirt tracks. Comfy and casual sportswear and closed-toe shoes are the best gear to be in on a buggy. Even if Tenerife is a sunny island, it can get a bit chilly in the mountains so maybe bring along a cardigan or jacket. Some providers are well-prepared for this and will hand out jackets and gloves at the beginning of the tour. To be on the safe side, however, you should bring your own along with you.