The best selection! Canyoning in Tenerife

All canyoning tours in Tenerife at a glance

Here you book the best canyoning tours in Tenerife. Tours with pick up from your accommodation or hotel. Experience an exciting day in the beautiful nature of the island. All tours are led by professional guides, there are different levels of difficulty to choose from.

Canyoning on Tenerife in the gorge of Los Carrizales

A challenging gorge hike through the Barranco Los Carrizales, a natural water park in the heart of the Teno Mountains. 6 to 7-hour canyoning on Tenerife with numerous jumps, 10 rappeling points as well as great natural slides and fabulous views. Suitable for For people with mountain experience or similar activities. Including technical guide and equipment. 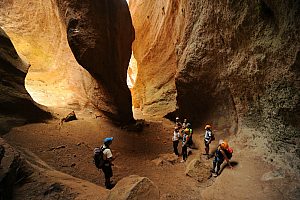 Abseiling in the Arcos canyon of Tenerife

An adventure tour in perhaps the most beautiful gorge on Tenerife: Los Arcos is a natural wonder made of stone in the middle of the enchanting Orotava Valley. A professional guide will teach you how to use ropes and harnesses as you go dry canyoning and will guide you through the rocky terrain at some simple abseiling locations. Suitable for beginners.

Canyoning - the ultimate adventure in Tenerife

A guaranteed thrill: Canyoning in Tenerife is a holiday highlight for adventurers and active holidaymakers. In the "Barrancos" - the canyons - you can follow the path that the water has washed into the rock over centuries.

Explore some of the island's most beautiful cascades and rivers while canyoning. The goal of this versatile trend sport is to walk through a canyon from top to bottom and safely overcoming natural obstacles. To achieve this, several activities are combined.

On these tours you will hike, climb, slide, abseil, jump, swim and have fun. This is a great leisure activity in Tenerife, even for beginners.

Imagine yourself accompanied by the crackling of the waterfall as you glide down the rock metre by metre and after the descent you jump into a crystal clear mountain water pool. On a guided canyoning tour in Tenerife you can concentrate fully on the challenges of the canyons.

Professional guides will lead you safely through the tried and tested courses. Tours for beginners, advanced and for professionals make canyoning an adventure for holidaymakers of all ages. Children can also participate in easier tours accompanied by an adult.

Apart from the thrill, the experience of nature is the main reason for a canyoning tour on Tenerife. Because the canyons are hidden in some of the most beautiful places on the island.

Canyoning in Tenerife - which canyons are suitable?

Actually there is nothing that does not exist in Tenerife. As manifold as this "miniature continent" with its different climatic zones is, as different and rich are the gorges and canyons of the brilliant mountain world. This selection makes the island an ideal spot for canyoning tours. And that thanks to the mild climate all year round.

The most fun you will have with canyoning after rainfall, then most of the canyons carry water. In the Teno nature reserve lies the Carrizal gorge, one of the most beautiful and well-known
Routes. A difference in altitude of 400 metres and several rappelling points and slides await you on this course, which is also suitable for beginners. In the same massif are Barranco Masca and Barranco Seco.

Perfect for beginners are the gorges in the wonderful green Orotava Valley in the north of Tenerife. Not far from the capital Santa Cruz is the Anaga Nature Park with its dry canyon Barranco de Taborno. This is an absolutely recommendable tour, especially in terms of landscape.

For adventurers with more experience the Badajoz Gorge near Güimar is recommended. For those who really want adrenalin, take the tour through the Barranco del Río in Arico, the largest gorge on the island. The path is littered with several interesting watercourses and in places it goes down quite steeply. After the descents, the tours generally lead uphill again. This means that at the end there is a breathtaking view from the plateaus.

Canyoning in Tenerife - what do I have to consider?

For a guided canyoning tour in Tenerife, basically no previous knowledge is needed. You can simply get involved in the adventure. The routes are chosen according to your level. You should have a certain basic fitness, be able to swim and be free from fear of heights.

A tour can take between four and eight hours, depending on the course and degree of difficulty, and is associated with many sporting activities until the end. With respect for nature, some gorges are only accessible at certain times of the year, in other areas only a certain number of participants are allowed per day. This has the advantage for you that on a guided canyoning tour you have a gorge almost to yourself. Especially as a beginner, you should stick to certified guides who know the region and who know where the best places to go for a canyoning tour are in every season.

Canyoning in Tenerife - what do I need to bring?

On a guided canyoning tour on Tenerife, the organisers take care of the permits and safety equipment, which is essential for this leisure activity. Without helmet, climbing harness, ropes and hooks you should not enter any of the canyons. For your sporty day, comfortable leisure wear, a change of clothes, swimming costumes and sturdy shoes are just right. Sufficient water and sun cream should also be in your backpack.

Suitable provisions are also advisable for excursions lasting several hours. What else is necessary for a canyoning tour on Tenerife, you will find out from your organizer after booking.