A top pick for action-fans: Jeep Safari in Tenerife

Explore the fascinating landscape on the beautiful Canary Island on a jeep safari. Tenerife is jam-packed with mountains and in the powerful jeeps you discover the most beautiful viewpoints whilst safe and sound! A jeep safari in Tenerife is a classic and should not be missing on your holiday to the Canaries! Various jeep safari tours in Tenerife include swim stops and off-roading opportunities. Book online now and jump on a jeep to explore the lush landscapes. 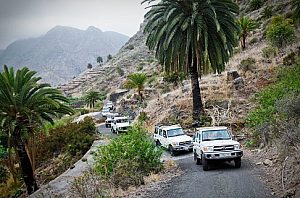 Take the jeep from Tenerife to La Gomera to explore the beauty of nature on the island. The jeep safari from Puerto de la Cruz in the north of the island to Gomera takes the whole day. The programme includes a visit to the Garajonay National Park. Lunch is also included in the price. 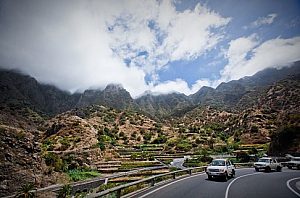 Head off on an adventure: The jeep safari from Tenerife to La Gomera starts in Playa de las Americas (south). Discover the Garajonay National Park on La Gomera and many breath-taking viewpoints. Includes lunch. 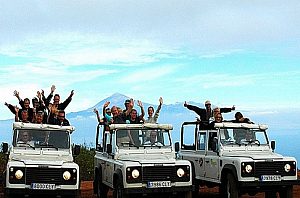 Breath-taking views on the Masca Jeep Safari on Tenerife

You can get to know the island very well on the full day Masca jeep safari on Tenerife, which starts in Puerto de la Cruz (north). The Masca jeep safari will take you to places like Icod de Alto, La Corona, Garachico, Santiago del Teide and the dragon tree in Icod de los Vinos. 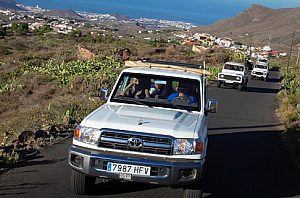 Explore Tenerife with the half-day Jeep Safari Teide, starting in the south 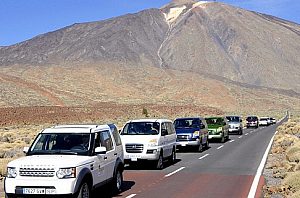 Full day 4x4 jeep safari Teide + Masca in Tenerife with many stops in the most breathtaking areas of the island. Route from Arona via Vilaflor to national park Teide, Arguayo, Santiago del Teide and Masca.

Are you looking for a change for your holiday in Tenerife? Want to see something other than a sandy beach and the typical tourist stuff? Do you want to find out what happens in the middle of the island? Then buckle up! The real diversity of this island is best captured and enjoyed on an extended jeep safari tour in Tenerife. Jeep riding is an excursion that will show you the so-called miniature continent in all its glory.

Explore the gorgeous countryside with its picturesque villages, curious volcanic landscapes, narrow country lanes, fertile valleys and the highest mountain on the island - the Teide - on a 4x4 road trip. A safari with a jeep in Tenerife is not only a pleasure due to the exposure to the stunning scenery, but above all it's a blast! Pick up cool info along the way and come out of it knowing a lot more about Tenerife.

Jeep Safari in Tenerife - where to go?

One activity - plenty of places to do it, that's one way to describe a safari tour in Tenerife. This adventure trip in agile off-road vehicles takes you to several hot spots on the island in just one day: Viewpoints, mountain villages, gorges etc. A comfortable and exciting way to see more of Tenerife. And you don't have to worry about anything, not even how to set up the Satnav or study a map. You just jump in and enjoy the ride.

You are a co-driver on the guided jeep safaris. In-between you have the camera at the ready, because views will meet you from every angle on a jeep safari in Tenerife. When the imposing mountain walls of the Teide Nature Park build up in front of you or the view behind a bend suddenly becomes so wide that you can look across the beach and coast to one of the neighbouring islands.

Some of the jeep safaris even lead to the neighbouring island of La Gomera, so that you can also enjoy the sight of the impressive coasts on a ferry trip and then embark on an adventure on the idyllic island west of Tenerife.

Jeep Tours in Tenerife - when and who with?

During this leisure activity in Tenerife you will be accompanied by local guides, who will make this trip more than just a road trip. They will show you the most beautiful areas in Tenerife and tell you everything you could hope to know about history, volcanoes or small towns and mountain villages, people and the flora and fauna.

Have fun on a jeep safari in Tenerife and get acquainted with the genuine island far away from the tourist-crammed centres. Most jeep safaris in Tenerife are available all-year-round and come with a pick-up and drop-off service.

You don't spend all day in the jeep. There are several stops on the route, so you can hop out and have a walk around. Be it to enjoy one of the magnificent viewpoints, to visit one of the pretty villages, the banana plantations typical of the region or to grab a bite.

This all-day jeep safari starts in Puerto de la Cruz in Tenerife and goes over to La Gomera. From the port, take the ferry to San Sebastián de la Gomera and away you go. The journey takes you along the charming San Pedro Trail to the heart of this charming neighbouring island. A visit to a banana plantation and a trip through the gorgeous Garajonay National Park, the Roque de Agando and the Laguna Grande are among the highlights of this tour.

Lunch in La Gomera is also included. In front of the beautiful Playa Caleta beach.

This tour is available all-year-round from Monday to Friday and lasts about eight hours. A jeep safari to La Gomera also starts from southern Tenerife - in Playa de las Americas. This tour offers breath-taking views and many interesting stops.

The magnificent viewpoint La Corona and the famous dragon tree Drago de Icod are only two highlights of the 4x4 Jeep-Safari Tour Masca in Tenerife starting in Puerto de la Cruz. The jeep takes you along narrow mountain roads and through impressive forests, verdurous villages and volcanic landscapes.

A stop is planned in Buenavista, the last village on the northwest coast of Tenerife. A highlight of this tour is the view of the breath-taking Masca Gorge! On the way there you will pass the mountain village with the same name, one of the most tranquil and pristine spots in Tenerife. This tour is available throughout the year and starts every Wednesday.

Jeep Safari Tenerife - the best tours starting in the south

You can't miss the Teide when you're on holiday in Tenerife. At 3718 metres, this impressive island volcano rises and towers above everything else. It is understandable that many holiday-makers are drawn to it and it makes sense to get closer to the top if you're okay with heights.

The volcano and the surrounding nature park are the main destination of the four and a half hour Tenerife Jeep Safari Teide Tour. Here you pass one of the landmarks of the island - the stone tower of the rock formation Roques de García which is shaped like God's finger.

The Pico Viejo is as impressive, it is a little smaller than the Teide, but much older. Vilaflor is impressive and will make you marvel. At 1400 metres above sea level, it is the highest village in Tenerife and is well-known for its clean and clear air. The view from up there is something very special and reaches as far as Gran Canaria on a cloud-free day.

This tour is doable all-year-round and runs on Tuesdays, Wednesdays and Saturdays.

With the imposing Teide and the mountain village Masca, you combine two very special destinations on this Tenerife jeep safari. A day trip that takes you from Playa de las Américas through beautiful countryside to the northwest of the island and to some of the most spectacular viewpoints.

The Teide National Park is not only geographically the green heart of Tenerife and more than you could imagine under a breath-taking volcanic landscape. On the jeep safari you will drive through this natural wonder and stop off to get out in many places to take in the beauty even better.

The tour is available in every season and runs daily except for Sundays.