Quad Tenerife - All tours at a glance

Quad biking in Tenerife is an exciting way to explore the island! We offer quad tours throughout Tenerife that go along various coastal or off-road routes. Drive the quad yourself or buckle up next to your buddy. Pick between doing a half-day or full-day tours. From only €35 per person! 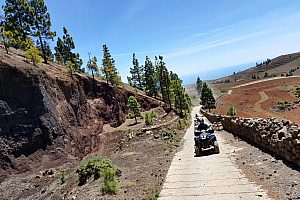 The original and best guided quad tour on Tenerife

Choose between the ultimate Teide quad bike tour on Tenerife through Teide national park or the forest and wine tour by quad bike. All quad tours on Tenerife start from Playa de las Americas / Los Cristianos. 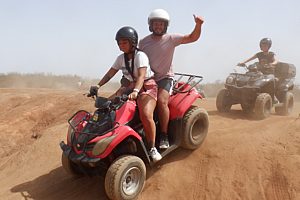 Amazing quad bike adventure in Tenerife. Two entertaining tours from the south via Vilaflor into the mountains - either 90 kilometres through the Teide National Park or 60 kilometres with an off-road component through the forests of Tenerife. In each case with a guide. 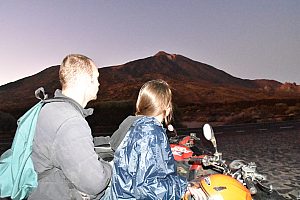 Fantastic quad tour in Tenerife through the Teide National Park in the evening hours. Experience the unique volcanic landscape around the Teide at sunset and watch the starry sky at over 2000 meters. The 3-hour tour with start in the south is accompanied by a guide. 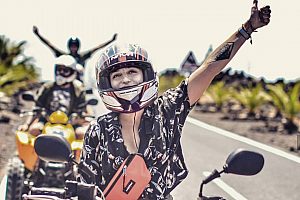 The quad safari in Tenerife starts in the south of the Canary Island. Or you can simply be picked up at your holiday accommodation (included in the price). The spectacular drive with the small off-road vehicles takes you through the Teide National Park to an altitude of more than 2000 m. 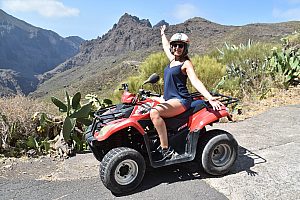 Experience a quad tour in Tenerife, which takes you close to the coast near Los Gigantes into the impressive mountain world of the Canary Island. Drive along the famous Masca Gorge and visit the "hidden mountain village" Masca. An experienced guide will accompany the 3-hour tour. Water and snack included! 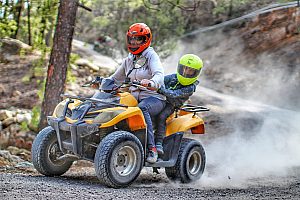 Adventurous quad safari: In Tenerife's south offroad through the forests

This quad safari on Tenerife takes you through the wonderfully scented pine forests of the Corona Forestal Natural Parkk in the south of the Canary Island. Together with your local guide you will race off-road over hill and dale and stir up the forest floor. Incl. island wide pick-up, water & snack! 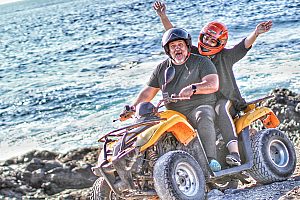 This costal quad safari in Tenerife's South will inspire you! Race with the small ATVs on spectacular off-road tracks and enjoy the view of the seemingly endless Atlantic Ocean. Experience a Canarian adventure where you can let the salty sea breeze blow around your nose!

Guided tours with the Quad in Tenerife promise pure adventure!

Become an explorer and experience the diversity of the island on a quad tour in Tenerife. Get to know lush landscapes and pretty places, enchanting vineyards and lovely pine forests, verdurous valleys and mountains. Enjoy the driving pleasure on the off-roading vehicles, which glide over every terrain with ease. Be it an asphalt or sand road, country lane or dirt track. The robust four-wheeler is the ideal machine for exploring on. Coastal paths and mountain roads in Tenerife come alive on a quad. You can literally climb the heights of the Teide and put the quad to the test on awesome off-road routes.

Guided quad tours show you Tenerife the way the locals know and love it. Go straight to the heart of nature and get a feel for the untouched beauty that is still very much alive and kicking there.

See the south of the island with Playa de las Américas, Arona, Costa Adeje and the west coast with Santiago del Teide being a big deal when you rent a quad in Tenerife. Go along the coast or head to the centre of the island instead - whatever floats your boat. We recommend getting acquainted with Teide if you’re into volcanic stuff. As you make your way up the mountain, keep your eyes peeled and take note of the rock formations that change practically every metre.

Quad tours in Tenerife are a good shout for both motorsport fans and guests with no experience at all. Whether you come with your kids and family, your mates or your better half - the quad tours are absolutely the right thing to do on holiday in Tenerife. If you want to create your own tour, this is do-able, so you can decide exactly where you want to go.

The best quad tours in Tenerife at a glance

One of the most popular quad tours in Tenerife takes you to the Teide National Park. This several-hour excursion takes you to Arona and Escalona and to Vilaflor, Spain's highest village, among others, and make the most of lovely views along the way. An adventurous off-road route is also part of this tour, which takes you to the top of the Teide at an altitude of around 2200 metres. You can also head to a typical island finca with a wine bar on this excursion. This tour is available all-year-round!

Combine driving fun and sightseeing on a Forest and Wine Quad Tour in Tenerife. Firstly, it goes up the mountains and then along to some charming villages and hidden hotspots on the Canarian Island.

On one of the large wine plantations you will visit a traditional Canarian finca with a typical wine cellar where you can taste some wine. The return journey leads through an enchanting pine forest and to some magnificent and memorable viewpoints. This is also do-able throughout the year.

Why not put together a few other outdoor activities and make a super-fun adventure out of it? You could go jet-skiing or hop on a mountain bike and get back to basics. Let a guide show you around the island and let the adventure begin.

How safe are quad tours in Tenerife and who can join?

Safety is very important on the guided quad tours in Tenerife. You will receive a short and sweet intro before you kick things off – you'll pick up a little bit of driving experience and get to grips with how to handle the vehicle.

Equipment and insurance are included on these excursions. A guide is by your side the whole time and they'll show you everything from the conventional roads to the daring dirt tracks. The tour stops often so you can have something to eat or drink and you can ask questions at any time.

If you want to drive a quad bike on your own, you must be at least 18 years old and have a driving licence - and have it with you to hand. Children over the age of 6 can be passengers.