The best selection! Climbing in Tenerife

Climbing in Tenerife: all tours, areas and prices in overview

Book here guided climbing tours in Tenerife with island wide pick up from your accommodation. Climbing in Tenerife is available in all levels and regions. Also suitable for beginners. Equipment and material is provided by the operators. 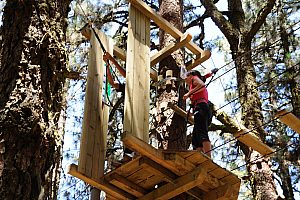 Forestal Park Tenerife - climbing course with fun and pure adrenaline! Enjoy a wonderful time in nature during physical activity, no prior knowledge necessary. The Forestal Park is an experience for all age groups and also for school excursions, groups, companies and more.

For a long time, Tenerife was considered as the most beautiful and unknown climbing area of Europe. That has changed. Tempting rocks, cliffs and walls have made the volcanic island a real dream destination for climbers and boulderers. And not only when it is winter at home.

Climbing in Tenerife is possible all year round. Also holidaymakers who want to gain first experiences on the rocks are in good hands on the island of eternal spring. On the island, which is sun-drenched, especially in the south, the external conditions and the infrastructure are right for climbing and thus for a special holiday adventure.

The biggest of the Canary Islands also offers the largest and at the same time most compact climbing area with currently about 1000 routes from easy to extreme. Experienced climbers in particular will get their money's worth with numerous routes from the 6th French difficulty level upwards. Nearly 30 different massifs are developed throughout the island and well equipped. And the local climbing scene is always looking for new routes. Cracks and ledges, slabs and overhangs - there's plenty to do on the island's rock formations.

Climbing in Tenerife offers some technical challenges and new perspectives for advanced climbers. As a bonus to the varied tours on the mountain, climbers on Tenerife can expect a mild climate all year round and a magnificent landscape that provides impressive views on every ascent. Climbing in Tenerife is mainly done in canyons.

The volcanic rock of the island changes its colour and structure with almost every massif. From smooth to angular or pointed to holey, everything is there.

Climbing in Tenerife - with view to the Teide

Climbing in the volcanic crater - this is another argument for a climbing and adventure holiday in Tenerife. The wondrous lunar landscape around the Pico del Teide is considered a unique climbing garden with a special atmosphere and some of the most bizarre formations ever. Against the imposing backdrop of this towering landmark, outdoor sports enthusiasts can also find some of the most beautiful towers and rocks. The Cañada del Capricho is specially recommended.

Most of the developed climbing areas in Tenerife are located in the southeast between Arico and Granadilla. More modest but not less important is the choice in the north and west of the island.

Climbing on Tenerife - Courses for beginners

In Tenerife you can get a taste of climbing and just as easily you can learn the first holds and steps during a climbing course on the island. Previous knowledge is not necessary. Only the courage and a little perseverance. Under professional guidance and protection, most climbing schools train directly on the rock.

The introduction also includes the material and knot knowledge as well as the basics for belaying and abseiling. For beginners the area near Arico offers beautiful routes to train their finger skills.

Climbing in Tenerife - courses for families

Adventure holidays in Tenerife - this is also something for families with children. Everyone gets their money's worth when climbing and can enjoy the wonderful nature of the island to the full. Most of the massifs of the island have very demanding routes, especially for sport climbers. But there are also rocks that children and adults with little experience can tackle together.

Examples are the Arico Gorge and Las Canadas on the Teide. Most of the island's climbing areas are easily accessible and the routes between the car park and the rock face are also manageable for children. There are operators who offer special climbing courses for children and adults.

Climbing areas in Tenerife - a selection:

The largest and most varied climbing area on the island offers more than 200 marked routes in the middle of a scenic gorge. In Arico, professionals will find challenging vertical paths and overhangs in a relatively small area. Beginners who want to try their first rocks will also find what they are looking for here. Even for children, routes are secured.

The volcanic rock with its holey structure and its black to reddish colouring is a striking feature of this climbing area.

As one of the oldest climbing areas on Tenerife, Las Vegas offers a long, proud rocky bar with some 6-way routes. Once you have overcome the cactus gardens at the foot of the wall, you will be able to let off steam on this rock. Sports climbers as well as friends of traditional climbing will find a lot of variety with about 100 routes.

Situated above a reservoir, the high walls of the canyon in El Rio command respect. The area near Arico boasts almost 100 routes of reddish basalt, many of which are for the more persistent climber and as a bonus in the back with very steep and technical climbs. Due to the density of particularly difficult routes up to a height of 30 metres, El Rio is favoured by many sports climbers.

4. Climbing in Cañada del Capricho (centre of the island)

Among sport climbers, Canada del Capricho is one of the favourites. The routes, which are spread over several sectors, offer different levels of difficulty and ideal conditions for both climbing and bouldering. Located at an altitude of 2000 metres and in the middle of the Teide Natural Park, this area, also known as Las Canadas, is a single climbing paradise.

Gorges and rocks, towers and walls alternate so impressively here that some also speak of a climbing labyrinth. With some routes from the 6th French degree and an angular rock, even experienced climbers are confronted with real challenges here. The climate is similar to that of the high mountains.

In the magnificent Anaga Landscape Park, climbers will find many of the longest routes on the entire island. There are about 100 in total. The Roque Negro and the Roque de Las Ánimas are two of the most famous climbs for experienced climbers in this area. The routes reach up to a height of 250 metres.

More than 100 routes are offered in one of the oldest climbing areas of Tenerife - Tabares. Located north of the capital Santa Cruz, both beginners and more experienced sportsmen can climb the rock.